Derick Snow is best known for his role as Shinra Kusakabe in the Toonami anime Fire Force. 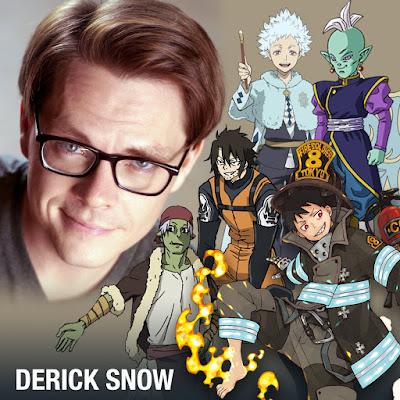 Snow was born in Missouri and raised in Barrow, Alaska. In Los Angeles he honed his craft, working in national commercials and musical theater. Now in Texas, he has voiced hundreds of projects you may enjoy.

In addition to video games, audio books and films, Derick brings his talent to an ever-growing roster of great anime. The hot new Fire Force can be experienced every week on Toonami and Funimation; Derick voices the lead Shinra Kusakabe as he follows the uneasy, spectacular path of a true hero.

In the gaming world, Derick can be heard in My Hero Academia: One's Justice 2, Paladins, SMITE, Ballista: Oculus Quest and more upcoming projects for PC, Switch and Xbox.