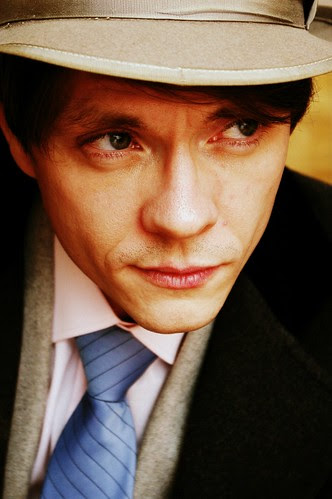 Since January I wrapped both films, did a little bit of ADR work for So This is Christmas and performed in shows for the Ultimate Murder Mystery and Harweldon’s Quillow and The The Giant.

On Valentine’s day Sam and I got all dressed up and went dancing, winning the best dresses contest and tickets to many more swinging Jazz Depot shows this year. I may not be a dancer, but I’ll certainty enjoy swirling around the floor in fancy outfits. The pic on the left is how I dressed up, pink dress shirt and fedora in supply!

The weather has warmed up enough for all kinds of little outside adventures for running and taking photos. I’ve gotten to play on the road, at my favorite park (Sequoyah), and trails over at Turkey Mountain. It’s been grand. All I need now is a place to swim…

I’ve had a few fun painting shows with Autumn Shade, as well as painting for kids around Tulsa. Last week I helped celebrate Dr. Seuss’ birthday by painting a giant Lorax for almost 600 kids! It was a blast. 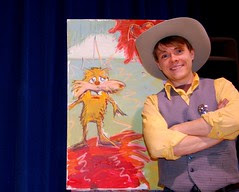 Both Sam and I are always taking pictures for fun and for little special clients. We took some headshots last week and have a wedding or three lined up in the near future. To prepare we just keep getting an extra light or lens here and there. We’re happy to shoot any event, hint, hint!

We’ve gone on a few auditions for upcoming theatrical seasons and oh, the shows we have done and will do! Samantha performed in her first foray with the Tulsa Opera, the well-reviewed Dead Man Walking. She and the show were intense and incredible!

On my end I’ve been cast in some shows with LOOK this year; more info on that tidbit very soon!

Right after my audition I kind of fell off the world with an upper respiratory infection I caught on Saturday night performing a murder mystery at The Pink House. It only took me six days to recover to about 85%, but I’ll take it! I slept basically the entire time and I’m very eager to be out of bed. Watch out, world!

This weekend Sam and I are debuting a humorous musical duet for The Olio, which is the show after the show of The Drunkard, which I’m also playing the loveable Sample Switchell in.

As usual I’ve got something up my sleeve in a few months with secrets aplenty when something solid appears from them. I’m a jovial juggler of many shadows at play. Hints: Los Angeles; Corpus Christi; Sketching on 4th of July